There are many factors relevant while maintaining an shrimp tank, and the substrate is just one of the puzzle pieces.

The Platinum Soil substrate is a substrate very rich in mineral components. It contains micro- and macroelements, as well as humic acids (this its deep black color) and fulvic acids. It has a very good porous and stable structure, enabling problem-free desliming and not disintegrating during use.

Platinum Soil is perfectly suited for both typical plant tanks, and for typical shrimp tanks. In the case of the typical plant tanks, where a high number of plants is planted in the beginning, a large amount of light is provided, gaseous CO2 is dosed, arrangements of natural stones (also affecting the water parameters) and roots are present usually, the richness of Platinum Soil will be used by the tank’s biotope. On the other hand, in the case of a tank with Caridina shrimp, where “customarily” very few plants are placed (because of “what’s the use of the plants for the shrimp”), excesses of mainly macronutrients may occur, which may change the ionic composition of the water in the tank adversely. An overflow of mostly potassium will occur, which will affect the shrimp harmfully. To put it simple, a decease problem will arise. Osmoregulation and numerous vital functions will be disturbed in such a case. In a typical plant tank (of course one containing a sensible high amounts of plants, light and CO2), potassium will be consumed by the plants, and as the tank develops, it is necessary to supplement potassium. In tanks intended typically for shrimp, the potassium excess will linger.

Thus, the Platinum Soil substrate should be properly prepared. In other words, while starting a shrimp tank, its “richness” must be get rid of, unlike the case of a plant tank, where Platinum Soil and its “richness” will be harnessed by the plants. It does not require any magical tricks or spells. Commercially available active substrates are different. They have various properties, contain various amounts of macro- and micronutrients, humic or fulvic acids. Thereby, they behave differently in tank. If a tank starting and maintaining method “A” is effective while using the substrate “B”, it does not mean that it will prove effective in the case of the substrate “C”.

How to start a shrimp tank using the Platinum Soil substrate

It is preferable to get rid of the excesses of macro- and micronutrients before placing the shrimp into a tank with the Platinum Soil substrate. A good method to do this is to flood the tank with pure RO water and replace pure RO water in the amount of 50-60% weekly. If in the maturing period of the aquarium we look to providing a proper amount of plants, we will stabilize the tank, which will be functioning for a long time. Obviously, it must be taken into account that there is a very high number of factors affecting the duration and effectiveness of the tank. Filtration, light, supplementation are all of some importance. However, the issue of filtration is so vast that it is hard to describe in few sentences here the optimum method with its pros and cons. To cut it short, we should take care to put an efficient filtration into the tank, ensuring both a very good water aeration (the tank is inhabited – apart from the shrimp – by billions of bacteria requiring oxygen) and a sensible amount of plants.

Water replacement during the tank maturation

Taking the above assumptions into account, it should be kept in mind that in the case of just one large replacement (of, let’s say, 99.99%) in a 100-l tank, the concentration of the component A after the water replacement will be about 80%. Thus, it is better to carry out several 50% replacements than a single large replacement.

It’s a critical thing every time while starting a completely new tank. It is worth using good, effective bacteria. There are many such preparations in the market, better and worse. The things the should be kept in mind is the expiration date and avoiding buying the so-called samples at popular auction services.

Also, a proper indication of a µS or TDS meter should be cared for. It does not require purchasing thousand-dollar meters. Obviously, such meters give a high reliability and accuracy of the measurement. However they require specialist electrodes, maintenance, calibration. And even the most expensive meter will be useless without a proper calibration. A cheap meter may be also sufficient for the task, provided that it will be calibrated correctly, will have operational new battery and clean electrodes. By the way, many persons came to us asking for the meter calibration, because they suspected the meters were indicating wrong values of µS or TDS. The differences in relation to a reference meter amounted to 40-50 µS (while both over- and underestimating the results), and sometimes even more then 70 µS. And what is the sense of comparing conductivities in such cases, how can you talk about “ideal parameters”? In most cases we were able to calibrate the meters, but not all. Very recently, we received a popular TDS meter, which could not be calibrated. And it was caused by an “optimization” of the meter in a Chinese factory. As it turned out, there was no potentiometer which could be used to calibrate the meter. And the meter had more than 40-µS error (underestimating the measurement results) and so remained.

We should also pay some attention to the additions used while maintaining a shrimp tank. When we do not understand how a given preparation works and how it affects the water parameters, it is best not to use it. A popular example is the AZOO Mineral+ used as an agent increasing the conductivity. Simply a huge mistake. This preparation is not intended for increasing the conductivity, but for supplementation of minerals, micronutrients. Using this preparation to increase the conductivity by about 100 µS, we may cause a big trouble in the tank.
Or making a reserve “concentrator” from a popular Salty Shrimp GH+ mineralizer to be dosed later from a bottle using a liquid soap pump. Or dosing all preparations at once, because it might be better… Or using Mironekuton at once in th form of various preparations and their replication: Mosura Old Sea Mud Powder, Benibachi Mironekuton, Mironekton, QualDrop Mironekuton. All these products are the same. There is just one Mironekuton originating from Japan, from one place. Or dosing very similar preparation together, for instance: Magic Powder, Bee Max, MK Golden Powder, Shirakura Chi Ebi. Or otherwise. A complete ignorance: dosing nothing, measuring nothing, no water replacements.

The bacterial flora developing in the tank grows in filter media and mainly in the substrate. It is a so-called activated sludge, very similar to that occurring in sewage treatment plants. Simplifying much, every sewage treatment plant produces pure water and waste, being just an excess of the activated sludge, which must be removed regularly in order to ensure proper parameters of the plant operation. In the case of excessive concentration of the activated sludge, the treatment process will be disturbed or stopped completely. Highly slimed tanks are a similar case. The tanks stops operating. Therefore, the sponges and filters should be cleaned regularly or the substrate deslimed. Desliming of the substrate has as many supporters as opponents. And it is recommended rather for experienced aquarists.

Large water replacements in the beginning of a tank's operation should not be feared of. Stating that large water replacements will flush out beneficial bacteria and “harm” the so-called nitrogen cycle is not completely true. Bacteria reside not in the water, but mainly in the substrate and filter media. The proposed starting method is not the sole proper way, of course. There are many factors relevant while maintaining an aquarium, and the substrate is just one of the puzzle pieces. 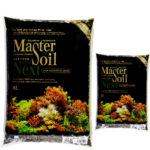