What should be considered while maintaining and fertilizing plant tanks based on active substrates? Where is my phosphorus, or rather phosphates, on the active substrate? Why is our fertilization method best? Why are the “all in one” fertilizers not always good? How to create and maintain a plant aquarium, using for example Japanese Platinum Soil active substrate and PLANT ONE fertilizer series.

We will try to answer these and many other questions in this article. Our observations and works on a fertilizing system lasted for about two years.

In the beginning, it is worth noting that fertilization of tanks with active substrates using the EI ( Estimative Index) method and the so-called “salts” is inadequate in many cases. What are the so-called active substrates actually? Using a huge simplification, they are in fact cation-exchange beds. Such beds have, among others, an ability to exchange cations. It is due to this property that the active substrates “bring down” GH, KH and stabilize the pH value, simultaneously liberating other cations to the water volume. An active substrate is “working” actively for the whole time, but it has a limited cation-exchange capacity ( CEC). This property is the basis for the substrate’s life. That is why while using hard tap water in tanks, we are reducing the life and functionality of the substrate.

Perhaps every fan of plant aquaristics is searching for the best and simplest way of effective fertilization of their tanks. I’m searching for an effective “all in one” fertilizer which is simple to use. A common message in many forums. Or: I’m testing a 3-in-1 super fertilizer: macro, micro and carbo. I’m curious how it will perform in 2 weeks. It is not hard to predict that it will be poor or it won’t work at all. But why? There is and there will be no one all-purpose fertilizer for plants, just as there is no an all-purpose glue. It is a simple consequence of the plant biology, diversity of biotopes and various NPK nutritional requirements of plants in a given moment. Obviously, all-purpose fertilizers of the “all in one” type will work or they won’t. If they work, they will create problems in the working tank eventually. Why is that? The “all in one” all-purpose fertilizers have predefined NPK and micronutrient ratios, which, sooner or later (rather sooner) will generate excesses/shortages of, among others, NPK nutritional elements, micronutrients and trace elements. As a result, they will “topple” the tank…

Fertilization with PLANT ONE, or “all in one” of the “do-it-yourself” type.

Fertilization with PLANT ONE, or “all in one” of the “do-it-yourself” type.

The PLANT ONE fertilizer series was developed so as to enable to adjust the fertilization in any way, depending on many tank parameters (substrate, plant species and numbers, amount of light, CO2 concentration and water parameters – GH and KH). One may say that due to formations, the PLANT ONE system is just the “all in one” fertilizer, which may be composed at will, dosing proper amounts of NPK, micronutrients and trace elements. If you need nitrogen, you use N GREEN. If you need iron, you use Fe HYBRID. If potassium is needed, you use K CLARITY. If micronutrients is needed, you use TRACE PLANT. However, how do you know, how many of the individual NPK components is needed in the tank? If you want to achieve good long-term effect, you should “know” your tank. Successful maintaining of a tank requires just several simple measurements using aquaristic tests. When you gain experience, the measurements will become unnecessary.

Three fundamental issues. What you should take notice of first of all.

Tank start… Obviously, for starting a tank, you should use well-proven, efficient bacteria and an efficient filtration system, which will supply the tank with oxygen effectively and will ensure a proper water circulation simultaneously. Aeration? But there are no fish in the tank at the beginning, and the air “flushes out” CO2?! But yes, the aeration is reasonable, because millions of billions useful bacteria (responsible for the nitrogen cycle, among others) live in the tank, needing exactly oxygen to live and grow. It is particularly important in the beginning of the tank development, when the plants are still too small to produce a sufficient amount of oxygen. During the first week or two, it is worth carrying out regular water replacements (every 2-3 days) in the amount of 25-35% of the tank volume, and controlling such parameters as GH, KH, potassium concentration, optionally NH4, NO2 and NO3. In this period, fertilization should not be introduced, the lighting time should be cut to 5-6 hours and only CO2 fertilization should be used. After 2 weeks, when the plants grow roots and the nitrogen cycle is running (that is, NH4 and NO2 are undetectable), we may start fertilization. In the beginning, it is worth checking potassium concentration and optionally adjust it to a value of about 10 ppm.

Phosphorus… Where is my phosphorus, or rather PO4, on the active substrate? It is a very frequent question. Abracadabra… You are dosing 0.1 ppm. Few hours later, you’re checking it… and it’s ZERO. Well, did the plants absorb it? You are dosing another portion… To the same effect. ZERO. Another one. Still ZERO. At least, after several such operations, you see some non-zero value in the test. So you are increasing the phosphorus (in fact, phosphates) further to a value of 0.6 or 2 ppm PO4, as you have read in some forum. But hey… where did the algae come from? Certainly I have “ideal parameters”?! Well, such is the way nature works – nothing disappears without a trace and nothing appears from nowhere. So, what’s going on with the phosphorus (phosphates) on the active substrate? They are still in the tank. Probably, the phosphates are sorbed onto the surface of the granules of the substrate, becoming available for plants’ roots. So how can I determine the phosphorus (phosphates) concentration in the case of tanks with an active substrate? You need just to collect a water sample from the bottom, approximately from ¾ of the substrate’s thickness, filter it through a chemical filter or a coffee filter, and then test the phosphorus (phosphates). The phosphates concentration in water collected from the substrate will be much higher than that in the water volume. You might be surprised… We are writing about it, because we are aware the lack of knowledge on this subject, as well as popular mistakes of superfluous phosphorus dosing in tanks on active substrates.

The photo below show a PO4 measurement in water collected from the substrate. It's worth adding that in the moment the measurements were done, the concentration in the water volume was ZERO, and 0.3 ppm PO4 were being dosed into the tank every day. Interesting, isn’t it?

How to operate a plant tank on the Platinum Soil substrate optimally using PLANT ONE series fertilizers. CONFIGURATION I. TANK 1.

Below, you will find basic technical data:

Tests of the first configuration of the tank lasted from October 2016 to July 2017. Together with amazonia24.pl, we carried out dozens (if not hundreds) of measurements and noted numerous observations. The huge amount of data we collected allowed us for drawing reasonable conclusions and developing a balanced fertilization method. In the first configuration of the tank with a capacity of 500 liters, we used in vitro plants (Laboratorium 313 plants), Japanese active substrate Platinum Soil and Qualdrop products of PLANT ONE series. The photos below show how beautifully the tank has developed… The picture on the right presents the tank 9 weeks after start.

How the tank is fertilized.

In the beginning of the tank operation fertilization with micronutrients and iron is not necessary. This fertilization may be started after 4 weeks. TRACE PLANT ONE 1 ml/100 l once per week and iron FE HYBRID in the amount providing a maximum concentration of 0.05 mg of Fe in the water volume. The doses of FE HYBRID should be increased gradually as the tank develops.

Fertilization method with PLANT ONE fertilizers, currently used in the 500-l tank.

K-Clarity K supplementation to 10 ppm after replacing the water

For the measurements, we used JBL and Zoolek tests. For determination of potassium concentration, we recommend test from Zoolek company. They yielded results much more close to those of reference samples than the JBL test. The GH and KH values were determined using JBL, which we consider most accurate. Nitrates (NO3) were determined by Zoolek and JBL tests. However, it seems that Zoolek is more useful and accurate in case of lower NO3 ranges, 2-5 ppm.

Below, you may find photos of plants from the described tank... 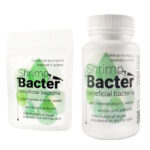 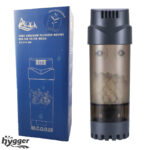 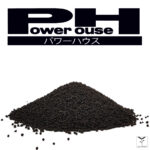